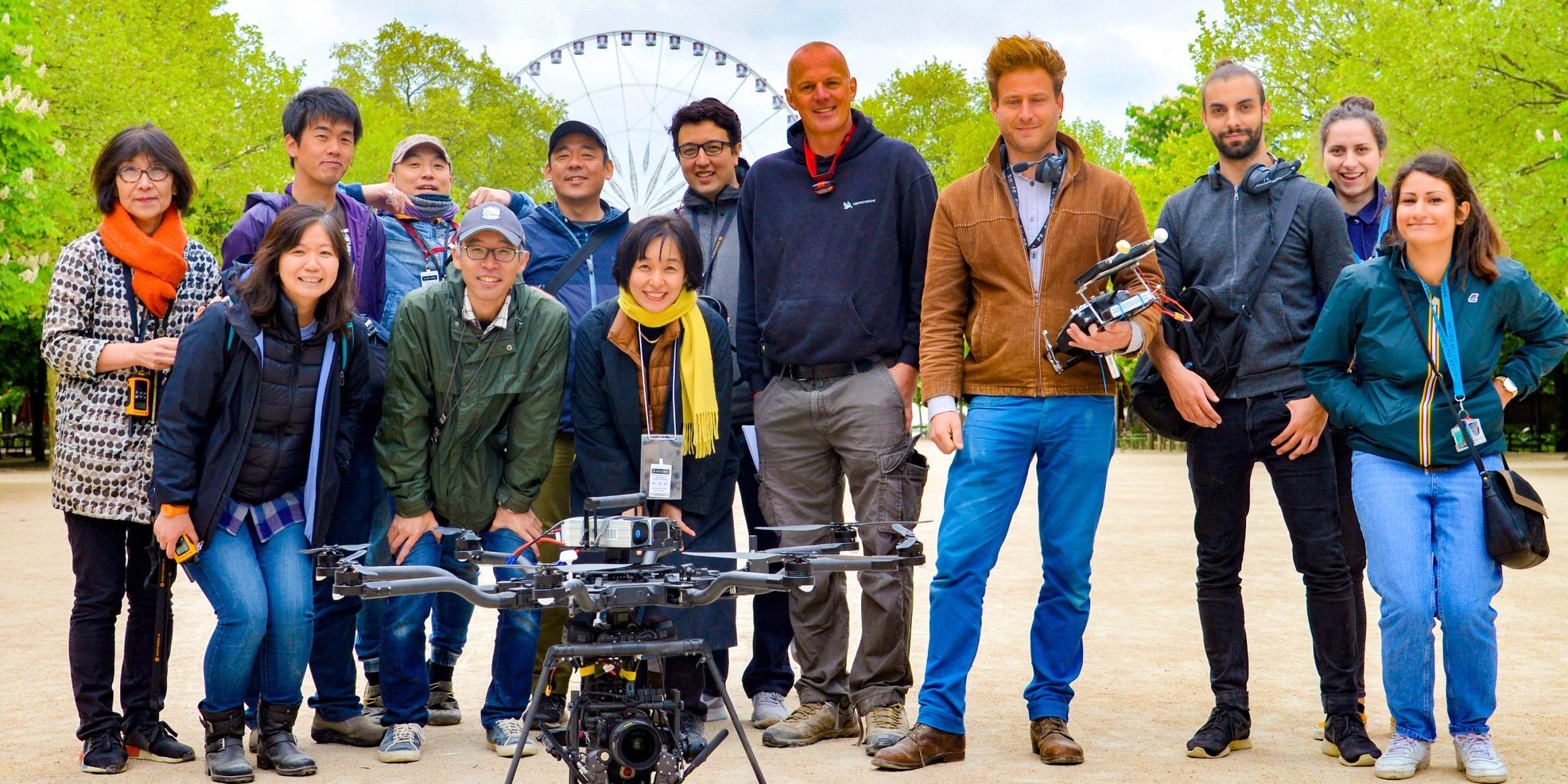 This is our second shoot for NHK Tokyo in the heart of Paris. Our first shoot took place at the Tuileries gardens. Our drone company was chosen among all the others for our know-how with our drone capable of carrying their Red Helium 8k camera. Japanese production had a requirement, shoot in 8K and with 60 frames per second, so with a red helium. Flying a Freefly Alta 8 in the center of Paris is something rare and a challenge to get all the necessary permissions, a challenge that our drone company has raised and won.

Foreign productions often call on us for our know-how and our skills in aerial photography in drones. In a week we shoot for Americans, Japanese and English, our production company is a reference for foreign productions and prefers to ask us rather than to bring their drone teams, especially for the quality of our shots but also for all requests for overflight clearances.

The challenge of this shoot was also technical because the production request was to fly a Red Helium 8K camera with cinema optics, follow focus etc … Our freefly Alta 8 is able to carry 9.1 kg so we had to take into account the weight of each lens, Connex etc … We did a lot of testing before moving on the shoot, weight test, empty flight etc … On a configuration like this there is so much technique that if a cable does not not all the system is Off. But with a lot of rigor and concentration, our shooting went very well, the drone aerial images that we realized are superb.

To fly a drone of 13 Kilos in the heart of Paris is an important administrative challenge because the legislation in force authorizes the overflight in urban area with a drone of less than 8 kilos and equipped with a parachute rescue system. Christelle who is in charge of all authorization requests at Freeway has done a remarkable job to allow us to fly our Freefly Alta 8 and the Red Helium in the heart of Paris. Our Alta 8 is S3 approved and is allowed to fly in urban areas provided that it is attached to a rope so captive. For this production it did not bother us absolutely because the movements had to be slow because filming in 8k, the information in the image is so important that you can not make fast movements. The Prefecture of Paris police allowed us to fly over conditionally, that the gardens of the Tuileries Gardens are closed and that security agents close the areas at the opening of the Park.

Our aerial aerial images shot men 8K are superb, they are rare because we are the first to have stolen a drone 13 kilos in the heart of Paris with a camera RED Helium 8K. We are very happy and proud to see that important productions like NHK trust us, they are not disappointed because we always manage to honor our services. Foreign productions call us more and more to realize aerial images in Paris. Our drone company has become a reference in terms of requests for filming authorizations but also for the quality of aerial photography in drones.

This website uses cookies to improve your experience while you navigate through the website. Out of these cookies, the cookies that are categorized as necessary are stored on your browser as they are essential for the working of basic functionalities of the website. We also use third-party cookies that help us analyze and understand how you use this website. These cookies will be stored in your browser only with your consent. You also have the option to opt-out of these cookies. But opting out of some of these cookies may have an effect on your browsing experience.
Necessary Toujours activé
Necessary cookies are absolutely essential for the website to function properly. This category only includes cookies that ensures basic functionalities and security features of the website. These cookies do not store any personal information.
Functional
Functional cookies help to perform certain functionalities like sharing the content of the website on social media platforms, collect feedbacks, and other third-party features.
Performance
Performance cookies are used to understand and analyze the key performance indexes of the website which helps in delivering a better user experience for the visitors.
Analytics
Analytical cookies are used to understand how visitors interact with the website. These cookies help provide information on metrics the number of visitors, bounce rate, traffic source, etc.
Advertisement
Advertisement cookies are used to provide visitors with relevant ads and marketing campaigns. These cookies track visitors across websites and collect information to provide customized ads.
Others
Other uncategorized cookies are those that are being analyzed and have not been classified into a category as yet.
Enregistrer & appliquer
Propulsé par